First, I'd like to say that Sydney Craft Beer Week was a great idea and kudos to the men behind making it all happen. 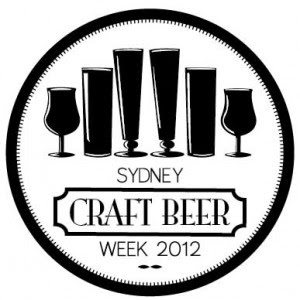 Upon procrastinating and reviewing my own performance (Platinum Liquor & Championship Vinyl Presents Our Top-5).

I think, or at least know on face value that everybody had a good time.

They told me to my face, and that's all I can expect.

If someone didn't have a good time, I would want them to have the balls to tell me to my face.

The food tasted good, the great beer speaks for itself.

Though there is a lingering part of me that thinks that my perforce was below standard.

A harsh self marking. Critiquing.

I have never hosted any events like that before, nor been to one or even seen one.

Sure, I came out with plenty of my own home brand of bullsh#t and all my wacky opinions and theories.

But, did I deliver when it came to talking about the beer and how I planned to talk about he beer in my mind leading up to the event?

After mulling over it, personally, I would probably say 'no'.

My fault because I got caught up in the music and well, all that drinking never helps.

I suppose it only went where the crowd wanted it to go. I can push the conversation in a certain direction and how they respond, is how the evening pans out.

Personally, I think I was disjointed and lacked composure during explaining the beer and what it meant to me as a whole and I think I only got halfway to describe why I think the beer matched to the music I had selected.

Which by the end, after all the great beer, no one really cared about what I thought in regards to the music.

Just quickly. A lot of you, for shame, had beers and food before (never do that when you are visiting an Italian! - poor form) hand, so you were on struggle street something fierce.

The positives were that,

We certainly know how to show a good time, I'm entertaining enough with all the vitriol reversing out of my mouth like a bat out of hell at full throttle.

But I'm ok with that.

Hopefully whoever came had a good time and if you thought I did ok, by all means let me know.

I don't exactly remember the entire evening, so let me know. Then again you might not remember either.

If you thought I did really shitty, let me know that too.

Whether or not I hunt you down and kill you after that acknowledgement is entirely different matter.

Good practice for next year, maybe.

See how we go.

Adam (love narcissistically talking in the third person) is weighing up all the options whether or not we will embark on any particular journey like that again.

Anyways, good to see Sydney to get the beer monkey of it's back, kinda.
Posted by Platinum Liquor at Saturday, October 27, 2012