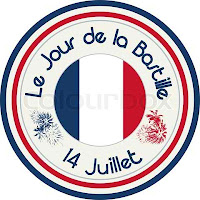 So Saturday is the 14th of July.

And yes, here at Platinum Liquor we will deem you a massive wanka, if you decide to come in and purchase French wine or beer, simply because it's Bastille Day.

If you feel like buying French wine or beer because your in the mood, that is more than fine.

However, simply to celebrate the national day of another country you have no afffilaiotn with is totally unacceptable. I don't care how good your summer holiday in Lille was.

No one in France celebrates the 26th of January or the 4th of July.

And by golly they might as bloody well should. We (The Allies) saved their arses from speaking German and eating pretzels. not once but TWICE!

Now, I have no problems with French people or the place. I love most French things.

I love their language, food, music, culture just as much as anybody else.

And interested in those things more than most people.

Maybe not so much their politics... and Alain Prost.

In fact, I've been trying very hard to impress a French woman for about 2 months now (obviously it's not going great. "Trying" is the operative word).

That is all, carry on.

I thought it's just something important for you (wanka) to know about Platinum Liquor and what we'd think of you.