Bigfoot captures the imagination, and its character is as big as the name implies, with a huge hoppiness in its earthy aroma, a chewy palate, and a great depth of flavor.” 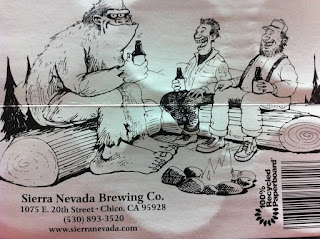 I love and miss Michael dearly. That sounds like I knew him personally. I didn't, but I know we would have gotten on like a couple of old cats in a pigeon pen.

it's here, so don't mess about.

And don't do the old ill just buy one rate it online, one two trick.

Buy a six pack, drink two now, two in six months and the last two in a year.


Better yet, buy a carton.

Like I've said before, I don't really do prices on the blog. it's not how we carry ourselves.

However you really must know that we are selling cartons (24 bottles) of Bigfoot for $125.

Watch it, neuture it, love it, respect it. drink that mother f*#ker.