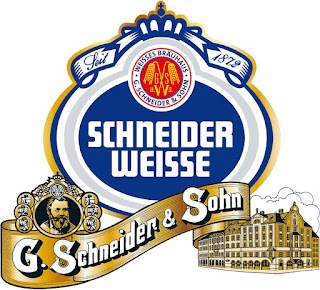 Schneider Weisse is back in town.

Even the cold hearted of Hop Heads have to agree that Schneider Weisse is arguably the Mack Daddy of Wheat makers.

Come, Aventinus, for how I've missed you.

New Hopfen Wiess (The collab with Garret Oliver at Brooklyn).

Schneider Weisse is the perfect example that I can leave my WW2 prejudices at the door.

That's right, I openly admit to having a weary/jaded eye on the Germans.

Maybe it's the Italian in me.

Maybe it's the "Aussie Pride" in me.

You just can't, not ever be half suspicious of a nation that basically owns the record for trying to take over the world and failing. Twice.

I don't racially vilify them. I just don't like Germans winning. At, well pretty much anything.

Schumacher? Ferrari? Real Italians will tell you, after a few wines/beers in a deep dark corner of the room when no one is listening. That it was a social no no.

We have landed some Hoppy Hefe form Mad Brewers.

It's a little brash, over done and leans too much toward the USA. I'm thinking it will taste better in 12 months when the hops have subdued a little and you get more wet from the wheat.


I did, indeed send a douch-y self loathing, look at me, self promoting tweet to Tony Bourdain to come visit and buy some tasty US brews while visiting Sydney.

It was half piss take and half "if it worked, billiant!".

He does, indeed, like VB. Victor Bravo he calls it.

I thought I might as well give it a shot, and considering the amount of self promoting that most other venues jerk themselves on about. A tweet to Tony is nothing so bad.
Posted by Platinum Liquor at Monday, March 05, 2012