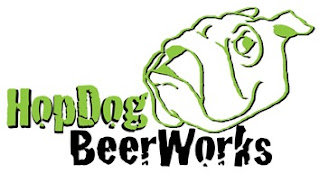 We now have beer from Hop Dog Beer Works.

They are in Nowra.

So considering I'm from the Shire, it's almost one of my "local" breweries.

Their beer ranges from staple delights to a raft of goodies on the way.

We currently have their ;

Relax, an IPA is coming!

Tim is my kind of person.
He is super nice, recognises a fellow beer geek when he meets one, obviously makes yum adventitious beers and obviously, he is not a twat.

I love the fact that Tim and I talked about our utter distaste for Halloween (although I love most things American, seeing children run around my local suburb "tick or treating" is just plane wrong. Ill take their beer, foreign policy, food and most other things, however they can keep that useless, crappy, ugly, down right stupid tradition. I'd rather let my child pretend to be Kanye West for a night in my living room rather than participate in Halloween), but we both love and adore pumpkin beers.
Their not IPA's and they take a bit of skill, thought, intellect, balance and a general idea of what flavours work together.

I could picture Tim and I having a beer, talking beer/shit listening to the Addicts (however, Tim comes across as a Pantera or MegaDeath fan) we could compromise with The Stiff Little Fingers???

Come in, buy Tim's beer and support my local.
Posted by Platinum Liquor at Sunday, October 23, 2011