Last week at Platinum Liquor we rolled out a new regime of buying beer (individually that is). 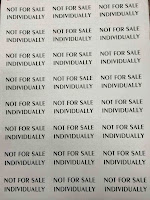 Accordingly, you will now see some of the stickers (picture above) placed upon selected (for those of you who don’t understand, ‘selected’ translates to “not all, only some”) six and four packs that will be for sale individually.

Categorically on beers that I utmost refuse to be stuck with single bottles.

Examples of beers that are now not for sale individually already look something like this:

Founders Rubaus
Yeastie Boys Gunnamatta
De Ranke XX Bitter
Most Pale Ales
Founders All Day IPA (the beer that started it all – the straw that broke the camels back if you will)
Yeastie Boys Digital
Riverside 77 IPA
Riverside 44 Amber
HopDog Alluvial Peach ( I'm not afraid of being stuck with HopDog AP, I merely think it's that tasty that you should be ashamed of yourself if you don't want to buy a 6pck, so i mack that decision for you)

And obviously, there will be others that come and go.

Previously, we (infamously) would charge excessively for singles of some of these beers (our version of economically encouraging pupils to purchase the designated six or four pack).

However, the diligence of some beer folk being at astonishingly militant levels. That our hands were tied and forced.

We simply cannot endure the burden of having so much stock (a.k.a money) sitting around doing nothing, losing flavor, slowly passing its best before and costing us in the long run.

I am worried about a loss in sales due to this new policy, you may ask?

Not particularly, the majority of the box tickers (y’know the guys who drink good beer and appreciate it, however if they didn’t box tick beers, this particular habit MAY well manifest itself in the collection of magazines, Warhammer, WOW, Pokemon, underpants, train timetables…), already choose not to shop and my establishment to begin with. They would rather purchase singles of everything of the Internet and refuse to pay our prices regardless.

They tend to only get in contact, visit or ‘possibly’ purchase things with us when we seeking items that other stores don’t carry, which equates to them carrying out this ritual every two to three months.

It would be no secret that I abhor the sale and purchase of beers (particularly those of reasonable standard) individually.

Philosophically I disagree with it.

I have also mentioned on previous posts how I find it incredible that the vast majority of people in the beer community judge and ‘rate beer’ simply by having tried 330 ml (sometimes less) of a particular brew (obviously there are exceptions, if a beer is exceptionally good or indeed exceptionally bad etc.).
I think of beers (and most importantly their brewers) are almost like relationships. I can’t tell you the amount of beers and beers that I either loved, liked, disliked and thought were horrid, but by the end of a six pack (bomber, 750ml bottle etc.) I had fallen back in or out of love with the said brew.

Beers can lose you, and/or come back to you. That’s the beauty of it.

So I am always perplexed when people (if I’m honest, a lot of you reading this blog now) give a ‘supposed’ opinion on a beer simply by tasting fifty milliliters. Quite astonishing really, considering you lot are also the kind of people that truck out that same old chestnut when people ask what your favorite beer is –

“Oh, it depends. On how I’m felling what I’m eating, what time of the day/month/year it in…”

But, how are you to fully understand and grasp this concept if you merely give a brew 330ml (or less) of chance in hell to impress you?

Food Brew for thought (I might have to cover this theory in its entirety on a additional separate blog post, considering I feel so strongly about it)

Economically, it is unrealistic tight rope to walk.

Once you add up all the time and effort it takes to fix up and mess around the four/six packs of beers in our fridges, it starts to become a drain on productivity. All that without mentioning the sometimes one to two thousand dollars of stock in singles and half empty six packs remaining that fall through the cracks and end up becoming toxic on you cash flow.

You have an invoice from a brewer/importer for one solitary carton of beer. That invoice is now due, however you have only sold a quarter of the box in singles. You pay said invoice and inevitably are stuck with just over half the box -

This is very simple example and explanation of what we call negative cash flow.

It's not the greatest scenario, however it's one that I have a clear conscious about.

You may agree with this new policy, it may make you want to pull your own hair out, however you must be able to understand and cannot fault me for submitting a rational explanation for its causes and execution.