I love stocking products that we will never sell.

Liquors and spirits that people, no matter how good he product is, it just doesn't shift.

My theory is, I can talk till I'm blue in the face about some brilliant other wordily sprit. About how it's hand crafted and hows it totally unique.

"There is only 30 bottles in the world and it has been filtered through the original jackets of Elvis Presley and The Fonz" I might baffle on a bit, but always the truth...

Inevitably, every customer smiles at me, "mmmm, maybe next time" and gives me the 'you look like a used car salesman' glare.

Obviously, this being me, I take offence to the situation and I'm immediately on the siege "Us VS Them" mentality. 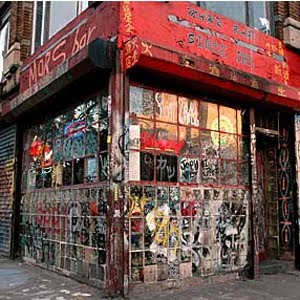 However, if we switched the situation, where I was, say a 'mixologist' and I had a beard, a small towel over my shoulder, some sort of flannel scruffed shirt with the buttons down up all the way to the top. Possibly the interplay of a 'smurf' beanie and thick rimmed spectacles and listened to the funky sounds of dubstep instead of the whiney punk sounds of something like The Buzzcocks.
Then, they instantly fold and splurge and purchase said $45 saffron infused quaint, ironically named cocktail, using the spirit that I just tried really, really, really hard to sell.


Give or take. Thats my argument anyway.

Maybe I really do look like a used car salesman.

Maybe I need to dress differently at work.

Maybe I'm the only person who, in all fairness respects people who make my tasty beverages. However, sometimes 'mixologists' just need to remember that, you are indeed, just the person who makes my f@&ken drink, I don't want you to impress me, I just want you to be a nice, normal person.

Having that trademark vitriol out of the way, the following products are now available (albeit at the Bellevue Hill store, please contact if you indeed want one and visit North Strathfield) :

These are actually really properly lovely and would be an absolute gem placed at the bottom of a Champagne flute topped with some Mumm over the top.
Monaco, F1? Anyone?

You can always prove me wrong.