Be Not Best For The Timid 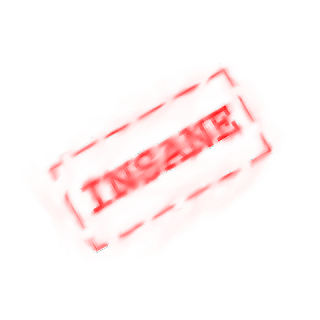 Well I know I could be. My father thinks I'm crazy. So I might indulged in taking weird anytime soon.

I thought it be best to set the record straight.

The tantrums, the outbursts. This post be not best for the timid.

You may have wondered into the store, thinking about beer.

And there is a good chance that if I haven't seen you before, that I might look bothered, upset, even a angry look on my face, or treat you egregiously

This is because, I'm outrageously cynical about everything. And that means, being weary and/or sceptical about you and my beloved beer.

The thoughts that run through my head, when you come in for the first time are:

Suspicious and hostile. Red flags are when you might talk too much about IPA, Mikkeler, 3FFF and other well know US craft
breweries. I just tend to think it's dubious indeed.

I lends me to procrastinate (of which I do on plenty of, on other useless and meaningless issues such as this) that you getting into beer because
A) It's not wine.

B) So not mainstream. Inevitably forwarding a case for yourself to look more interesting to other people. Not to mention for impressing Summer Finn when you meet her at the "Fleet Foxes" gig.

C) You read about it in some magazine that US BBQ and craft beer are now a thing.

Now, bear with me, it's not all doom ad gloom. One can prove themselves to me. Break my preconceptions (which I always like), show me that you are loyal and above all true to good beer because you want to be. Not because its the next "thing" right now.

I think of it like a ‘rights of passage’, (if indeed such a thing would exist) you come in and indeed look like you are solely getting into beer for self interest/promoting reasons.

It takes at least 3-5 visits into the store with well thought out carefully selected purchases (that means not just IPA and Imp. Stout), interesting questions and generally a lovely demeanor to win my love and affection.

Because good beer IS worth fighting for.

I like to think as myself as a prime standing choir boy evangelist proudly singing the praises for good beer (I stole that line of Sam Caligione, or as we call him here, GOD).

I sing more loudly and proudly than anyone else (ok I do have a hard line on some things, like supporting %100 owned and made Australian Craft beer not Kraft with a “K” [Cough Cough little Creatures Cough Cough Matilda Bay Cough Cough James Squire]
which probably pisses people off, I recognise its a unrealistic stance. However, if you and your family had dealt with the big two for almost half a century, you would hate them as much as me too).

I'm so passionate about the parish of good beer that if someone was to say otherwise,
Id say bring it on mother f*@ker.


Basically, what I’m trying to convey in the most particularly bad ego centric narcissistic way, I think of myself as living Christ in both stores and you philistines have to prove your beer loyalty of beer to me. And you have to agree with all my opinions about beer.

So, like everything, there is room for salvation and redemption.

Hang in there my child, you could possibly be one or two visits away from me being one of your best beer friends.

ATTENTION : Some parts of this post are factual. Most other parts, like me, are totally full of shit.
Posted by Platinum Liquor at Monday, April 16, 2012