Well, they used to.

I think it's lost on a lot of people that before Fritz Maytag, Paul Casmussi, Ken Grossmen, Vinni Cirluzio, John Maier, Chuck Silva or any super mega master brewer from the States.

The only examples of IPA was poorly pitiful totally underwhelming IPA's from old Britannia herself.

And she had let what was such a great beer that stood for so much in a time of great growth dwindle into a swindled amber coloured piss pot.

In fact, my theory is that the India Pale Ale is the very definition of Britain herself.

Once an unstoppable super power that was full of pride, vigour and panache now has been turned into pussy footed politically correct nanny state that inevitably had to hand the mantle over to the United States.

Does IPA determine the fate of the world???

I bet none of you drone hop heads have thought of any of this whilst listening to the amazing Pink Floyd album 'A Suacerful of Secrets'. (Ed Note : Iv'e changed my mind, the perfect album would be either King Crimson's 'Islands' or Spritualised 'Ladies and Gentlemen We Are Floating in Space')

A lot of people now, don't know of a time when you couldn't get a decent hoppy beer.
We should all be thank full for what we have.

So, to show how some of you should be thank full, I have ordered in some Greene King IPA from Ol'Blighty herself.
This is the perfect example of how bad it really was for a time. 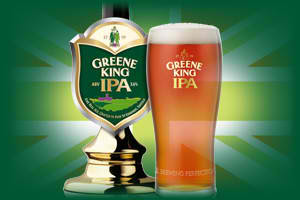 Just imagine, if you can (and I understand for some of you, it's hard, you might lack a bit of imagination when all you drink is IPA) a fermented beverage (it almost doesn't deserve to be called "beer") that tastes like the combination of Carlton Draught, feline urine, possibly a trough lolly from the gents room, artificial caramel flavouring and lightly dusted with alcohol (it's 3.6% ABV).

And yep, you guessed it, if you come in when I'm around and buy too many IPA's, your getting one of these bad boys to take home for free.

To see how bad it used to be and how bad it could still be if it wasn't for some individualistic brilliance.
Posted by Platinum Liquor at Monday, September 05, 2011