"The Wicked Flee When No Man Pursueth"

We our Glad to announce that our collaboration brew for Sydney Craft Beer Week, is now available in bottles and can be found at Bellevue Hill and North Strathfield respectively.

It was created for the screening of a modern day classic film, the Cohen Brother remake of 'True Grit'.

The thing that I love most about this beer, apart from the taste, is the fact that most people will hate it. 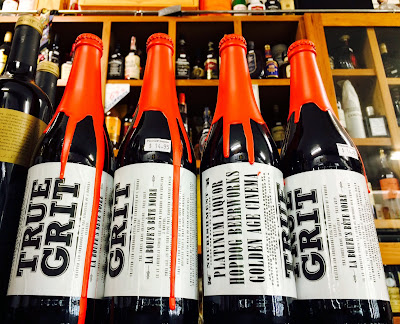 Is an American stock ale aged on bourbon oak chips for 3 months. This ale, is the very type that Rooster Cogburn would have downed severtal tankards, prior to apprehending and shooting several assailants. Corn and two types of rye are added to the grist, because that’s what makes good whiskey. One has to make do with what one has.

A quick dusting of pungent grassy american hops stops the malt in it’s train tracks and shoots it back into line.
It’s then rested on bourbon chips for months. Because when in oklahoma, one rests their ale in nothing but bourbon casks.