(The following post is the first of many to be published on who/what/why we carry and who/what/why we don't carry certain beer from certain brewers. This process matters to us and it should matter to you)

You can do something for love.

You can do something for money.

But there is nothing quite so satisfying as doing something out of pure hatred.

Were it not for hatred and spite, one of the best beer relationships might not never existed.

With him, he brought two bottles of beer (of which, both beers he does not make anymore - or at least in semi retirement).

Like most good beer people, Tim didn't say much. No speal, no impressive medals either, no pretend "I've always loved great beer" story (insert names of almost all beer reps*, of who some used to be wine reps*), he simply handed me his beers to try and he let them do all the talking.

After that, we had spoken briefly a few times on the phone and I had visited the brewery.

It took Tim a little time to warm up to me.

The very first conversation Tim and I had, was very positive from my side of things. At a time when everyone was making APA’s (Tim loves it when I call American Pale Ales that), I was motionless and giddy at the very prospect of him making a pumpkin beer, IPA and a spiced Belgian Quad leading up to Christmas.

For me, it was the first and thankfully not the last time that I had met a brewer that just “got it”.

He recognised what was needed from a new brewery, keen on the notion of aggressive beer, expansion, ideas and dreams.

However, as much as I was content with Tim’s words and more importantly his actions. Tim was still (and he might very well deny it to this day) unsure about me.

Was I some spoilt little kid, of whom beer was my next pet project?

Was I some kind of wanker? Well, I give off that impression all the time…

Was I annoying? We most probably, I haven’t lost that attribute yet.

Fast forward four or so months. I had read an article about Tim in ‘The Crafty Pint’ online mag.
Tim was funny and articulate as ever throughout the entire interview.

Mentioning and paraphrasing things that only the biggest stalwarts and committed beer people would have recognised.

It was only until the very next trip down to the brewery to pick up some beer (yep, that’s right. Until Matt came along, delivering cubes of pure anger. I would visit the brewery on my day off, every time I needed beer).

I brought some of my favourite beer books, a whole bunch of beers to trade for growler fills (NOTE – I used to bring Tim beers that were, mentioned in MJ Classic 500 Brews. So he could mark them off as he drank them).

That, afternoon our relationship grew into something special (-Cue 'The Wonder Years' soundtrack as I recount this touching anecdote-)

We talked about all the people in the industry we hated. Our shared enthusiasm for cynicism, bitterness and hatred knew no bounds. So pure and accurate it was.

We also drank beer. Made funny voices, talked about Batman and our deep and unadulterated love for Unibroue.

Now, whenever I visit the brewery, the very first thing Tim and I do (apart from share a beer of course) is discuss, judge, bitch and catcall about the people we hate in the very industry we love and hold dear.

I am proud to sell beer out this pocket rocket (well not pocket anymore) brew house down south. Tim is everything a modern brewer is supposed to be; 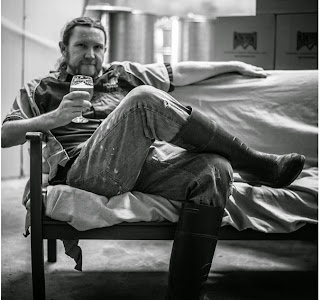 Moody, abrasive, funny, brooding, charismatic, a great public speaker, handsome (hands off ladies, he is spoken for) talented, experienced, passionate, kitschy and above all else, great guy.


There is never a problem stocking Tim’s beer. I never have any doubt that nothing less than 120% goes into each batch.

I sell beers from HopDog BeerWorks because it is endearing, inspiring and tastes great.

Tim’s thought and imagination means he creates beers worth traveling for, his story always matters. And that matters to me.

I have never had to second-guess why Tim is making any of his beer. He excretes passion. His sole pursuit is making the best beer he can possibly make. Tim and I don't have too much in common. My musical tastes are weak, I dress like a prat and cry when I watch the film 'Wreck It Ralph'. However, we are the prime shining example of when, the love of great beer and the hatred for those who try and abuse it conquers all.

There is a part of me that is not sure, or maybe some sort of a coincidence. However, I seem to always get along famously well with brewers that just make great beer.

Despite this I still have to remind plenty of people and the number of times I say to myself, that brewers just have one job.

And that is to make great, uncompromised, flavoursome beer.

Nothing more, nothing less.

And for me that’s all I can ask from a brewer.

*Pretty much the scum of the earth.
Posted by Platinum Liquor at Friday, November 07, 2014