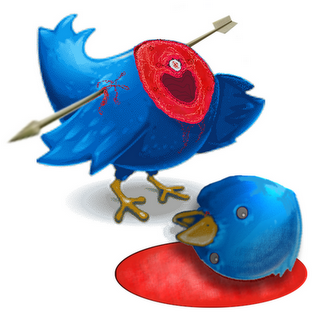 So. I've been thinking. Should I, or better yet. Platinum Liquor get Twitter??

I hate all this social media stuff so much. It's the biggest waste of time.
When I went travelling through the States and everybody that thought I was "rad" wanted to join on "facey" and I proudly said "not for me amigo".


It's just such a waste of time. I'm an inner circle kind of person. Probably from being Italian. Ever seen the Godfather??
If I like you, I like you. If your my friend, chances are I chat to you every week or couple of months through email or telephone. If I think your a bit of a twat (lots of people), I'll usually let you know reasonably quickly. I can count all my ACTUAL friends on almost one hand. Sure I know a few people, but that's where I differ from a lot of my 'dick Gen Y' compatriots.

Most new age "Bus Wankers" (sorry 'Inbetweeners' joke. I promised an ACTUAL friend) talk about people they barely know like they are Asterix & Obelix or Batman & Robin.
When the reality is, they hardly know them from a bar of BOOST!

What I am trying to say is this world is getting increasingly full of useless fake twats who act like they know everything and are friends with everyone (eg : Bus Wankers". That's for you Dane) and I cant help but hypothesis that Facebook and Twitter contribute extensively.

But what about a business? I'm sort of half keen for Twitter. I obviously, feel that a lot of things, I hate it and deem it a new crappy fad for infidels. But if it helps people connect with what's happening beer wise.....?

There is however, one big problem.

But, you haven't thought this out properly. Some of you might be ever so much surprised, this would also mean that I would not be able to hold back any snicketty whippy snarling possibly witty conservative sometimes right wing comments (usually negative, obviously) about almost anything.

Here are some examples of what could possibly make it to the list amongst the beer tweets :

-"Nice flat rimmed hat worn strategically and coloured coded of some US sports team that you don't, watch, follow or support. Bus Wanker!"

-"Cider is such a twat/Douche Bag drink now, why?"

-"The irony when hipsters buy vintage stuff, or vintage religious stuff (eg : bags with 'la Madonna' on them or tin boxes with 'Jesus' on them) when they are totally agnostic and if they were around in the 50's and 60's, they would have had their green voting arses kick the living shit out of them"

-"When people talk about how much they are a "foodie" (uuuurrrggghhhh) and all their favourite restaurants they got to. But they eat mashed potato out of a packet. Turns out they are just another bell end that watches Masterchef"

-"Vote Greens = the combination of oophorectomy and a prefrontal lobotomy"

I could go on. really I could.

So what do you think?? Send us one of those electronic mails things at platinumliquor@optusnet.com.au and let us know if would be keen on Platinum Liquor Twitter. say it aloud. It even sounds good.

If I get no answers then I'll probably do it anyway. Bus Wankers! (Ha Dane, that's four)
Posted by Platinum Liquor at Wednesday, December 21, 2011