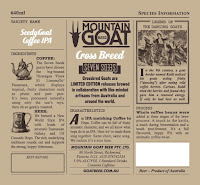 Also known as the Seedy Goat from
Mountain Goat brewery from Mexico.

Cam and Dave have come up with a an IPA made with coffee beans form some poor central American nation that obviously cost a lot even though the people who harvest it possibly live in houses made from banana leafs.

Basically. It's an IPA.

Anyway I know you will all enjoy it.

MMMMMMMMMeeeeeeeHHHHHHHHeeeeeeeeeeHHHHHHHHHHH ( that was an attempt to make a goat sound via keyboard, I think it didnt work)
Posted by Platinum Liquor at Thursday, September 08, 2011